In an ideal world, divorcing spouses reach agreement on all the key issues and the divorce proceeds as “uncontested”.

This is usually best for the spouses and the children from the marriage.

Unfortunately, the reality is often very different. Disputes can arise over any of the key elements in a divorce agreement such as:

Often, with emotions running high, divorce dispute resolution is impossible without the intervention of trained professionals like divorce lawyers or mediators.

Several different paths are available in such situations:

These are explained below so that you are fully aware of your options for resolving a divorce dispute.

What is Divorce Mediation in Alberta?

is the process by which divorcing spouses attempt to resolve their issues with the intervention of an independent mediator.

This mediator may or may not be a lawyer but should be a professional trained in mediation.

The mediator will try to guide the spouses to an agreeable resolution that covers the main points of contention in the divorce. He or she makes no decisions but listens to the arguments from both sides and makes suggestions.

The final decisions rest with the spouses, not the mediator: an important difference between divorce mediation and arbitration or litigation.

Mediation is often recommended as the first step in the resolution process as it has several important benefits over litigation:

Generally, if divorcing spouses are not too far apart in their expectations of the divorce agreement and are committed to an amicable settlement, divorce mediation is a recommended avenue to explore.

Lawyers in Canada have a duty to inform their clients that this option exists.

What is Divorce Arbitration in Alberta?

Arbitration is another option for divorce dispute resolution in Alberta.

Think of the arbitration process as a private trial that takes place out of the courtroom.

Before the process starts, both spouses must agree to participate in the process and abide by the decision of an independent and qualified arbitrator who is appointed by the spouses.

The arbitrator will listen to and assess the arguments from both sides and reach a judgement based on the facts presented. This decision is final and binding.

Arbitration has some major advantages over litigation for spouses committed to reaching an agreement without a trial:

Note that it is possible to use both mediation and arbitration in a divorce settlement. In this scenario, the spouses agree on what they can agree on during the mediation process and then appoint an arbitrator to decide on the remaining issues.

What is Divorce Litigation in Alberta?

When neither mediation or arbitration is an option for divorcing couples, and outstanding disputes are unresolved even with collaboration from the lawyers, the issues must be settled in court.

Even if one party wants litigation and the other does not, a trial can still result.

The courts in Alberta will always put the interests of any children first in a litigated divorce.

A final resolution will be made after testament is heard from both sides and cross-examination performed by lawyers, with expert witnesses often called to testify.

What is Divorce Negotiation in Alberta? 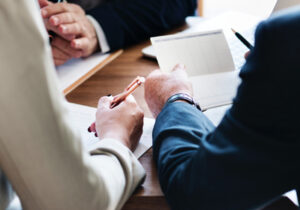 Divorce negotiation is either a formal or informal process for working towards a settlement in a divorce.

The spouses exchange their settlement offers and discussions are held or lawyers’ letters exchanged in an attempt to resolve the differences.

So, negotiation can be in person or otherwise.

If the negotiations are successful, a legal contract is drawn up and this becomes legally binding and enforceable in court.

If no resolution is reached, the spouses must take other avenues to resolve their disputes.

Parenting Coordination During a Divorce

One of the main areas of dispute in a divorce is parenting and child-related issues.

Parenting coordination is designed to resolve these issues and reach an amicable agreement between the parents for the care of the children.

The parenting coordinator in this process may be a mental health professional, child development specialist, or a lawyer specially trained in this area of mediation.

He or she will facilitate an arrangement for co-parenting the children that is fair for both parents and looks after the best interests of the children.

This is often preferable to litigation because it is usually quicker, less costly, and less stressful for the children than a long, adversarial trial.

What is Collaborative Law in Alberta?

Collaborative law is the preferred option for many divorcing spouses because it avoids the delays, expense, and stress of a courtroom trial.

A collaborative approach attempts to resolve the outstanding issues that are preventing the spouses from moving forward with the divorce.

The spouses first sign an agreement committing to work cooperatively.

The opposing lawyers usually meet together with the spouses informally. They provide professional guidance in an attempt to reach a resolution that is agreeable to both sides.

If an agreement is not possible, the collaborative lawyers appointed are unable to represent the spouses at trial.

Divorce litigation lawyers will need to be appointed by the spouses.

How Can Our Alberta Divorce Dispute Resolution Services Help?

If you are going through a separation and cannot agree on key aspects of the divorce agreement with your spouse, Spectrum Family Law in Alberta can help with the dispute resolution services outlined above.

Reasons why a justice may not let you get a divorce?

There are situations where a Justice may not let you get a divorce, these include:

1. Spouses who intentionally mislead the Court will not be allowed to divorce.

2. You and your spouse have children that you have not worked out an arrangement for.

You must ensure that these issues are dealt with before going to Court for a divorce application or else you may have to go back again after having dealt with any issues that were found.

What happens to property in a divorce?

It is possible for a couple to be granted a Divorce Judgment before they have dealt with the division of matrimonial property. This includes all of the property that they have acquired during their married life. However, most of the time, matrimonial property will be divided between the spouses during the divorce proceedings, either through an agreement or by following a Court Order. If the property is divided by an agreement between the spouses, each spouse must have had independent legal advice before entering into that agreement. If the property is divided by a Court Order, Alberta’s Matrimonial Property Act will govern the terms of the Order.

Property division can be very complicated and it is recommended that you speak with a lawyer about all of your options. For more information, see the Student Legal Services pamphlet “Division of Property: Married Couples”.

How do I get a divorce in Alberta?

Under the Divorce Act, one spouse must be “ordinarily resident” in Alberta. This means you must have lived in Alberta for one year immediately before the divorce action is begun. If you have children, it is usually best to file your divorce action in the province where your children live.

Does it matter where I was married?

You may be able to get divorced in Alberta no matter where you were married. If you were married outside of Canada, the Court will need some proof that the marriage was valid according to the law of that country. If this applies to you, you will need a marriage certificate and an affidavit proving the marriage was in solemn form (valid). If you were married in a Canadian province other than AB, a marriage certificate issued by the government of the province where you married would be sufficient proof of an out-of-province marriage. Please remember that you must still meet the “ordinarily resident” requirement (lived in Alberta for one year before your divorce action) no matter where you were married.

How long does divorce take?

The length of time from start to finish for a divorce action depends upon how quickly you (or your lawyer) finish the paperwork, how easy it is to locate and serve the documents on your spouse, and how many complications there are in the case. An uncontested divorce will generally take between 6 months to a year. A contested divorce could take several years.

Various things might happen during the 31-day waiting period between the date of the Divorce Judgment and the date you can make an application for a Certificate of Divorce:

1. You and your spouse might get back together. If so you should apply to set aside the Divorce Judgment. You would then once again be considered married to each other.

2. A spouse might appeal the Judgment. If this happens, no Certificate of Divorce can be issued.

NOTE: An appeal cannot be started after the Certificate of Divorce has been issued.

3. A spouse may apply to set aside the Divorce Judgment because it was obtained as a result of fraud. This application would have to be finished before a Certificate of Divorce could be issued.

The 31-day waiting period may be waived if there are special circumstances that make it in the public interest to grant the divorce earlier. An example of special circumstances would be one spouse wanting to remarry within a short period of time due to the impending birth of a child or death of a family member.

It is unlikely any of these occur, and the Certificate of Divorce is granted 31 days after the Divorce Judgment, on application to the Clerk of the Court.

What happens to the children during a divorce?

There must be arrangements made for children under 18 whenever you are going through a divorce proceeding. These are known as corollary relief Orders.

Note: if there are children, a Justice must see that there have been arrangements made for their support before granting a divorce judgment.

If you and your spouse have children under the age of 16, you MUST attend the Parenting After Separation Seminar before making any application to the court dealing with your children, or before applying for a Divorce Judgment. After completing the course, parents will receive a certificate of completion that will be filed with the courts.

Proudly a Member of